Comparative: Casa Pilatos or Las Dueñas Palace. Which of them should I visit?

Along with the typical visit to the Cathedral, the Giralda and the Real Alcazar, the historic center of Seville offers numerous places of interest that you can’t miss if you spend at least two days in the city. Without these main monuments of Seville declared a World Heritage Site by Unesco, these other places would undoubtedly be a must for your first day in Seville and for any tourist destination.

One of the most spectacular attractions in the Andalusian capital are the dozens of ‘casas palacio’ (palace-houses) located in the old town. If you already have information on the most prominent ones, you are probably wondering which of the two most famous palaces -to which the tourist guides lead- you should go to visit: either Casa Pilatos or Dueñas Palace.

General explanation and brief description of the two most famous Sevillian palace-houses to help you choose and visit one of them:

The oldest documents date back to 1483, when the Inquisition took possession of the land of a wealthy Jew. The property was extended with adjoining buildings, following the Gothic-Mudejar and Renaissance styles.

It currently belongs to the Ducal House of Medinaceli, such as the Pazo de Oca in the province of Pontevedra, the Hospital de Tavera in Toledo, or the Sacred Chapel of El Salvador in Úbeda.

The curious name for this residence, ‘Pilatos’, is due to the pilgrimage that Don Fadrique, a noble belonging to the powerful Enriquez de Ribera family, made to Jerusalem in the early 16th century. The second owner of the palace verified that the distance between the ruins of the Pilate Praetorium and Mount Calvary was exactly the same as from this palace to ‘Cruz del Campo’, a small shrine located on the outskirts of Seville. 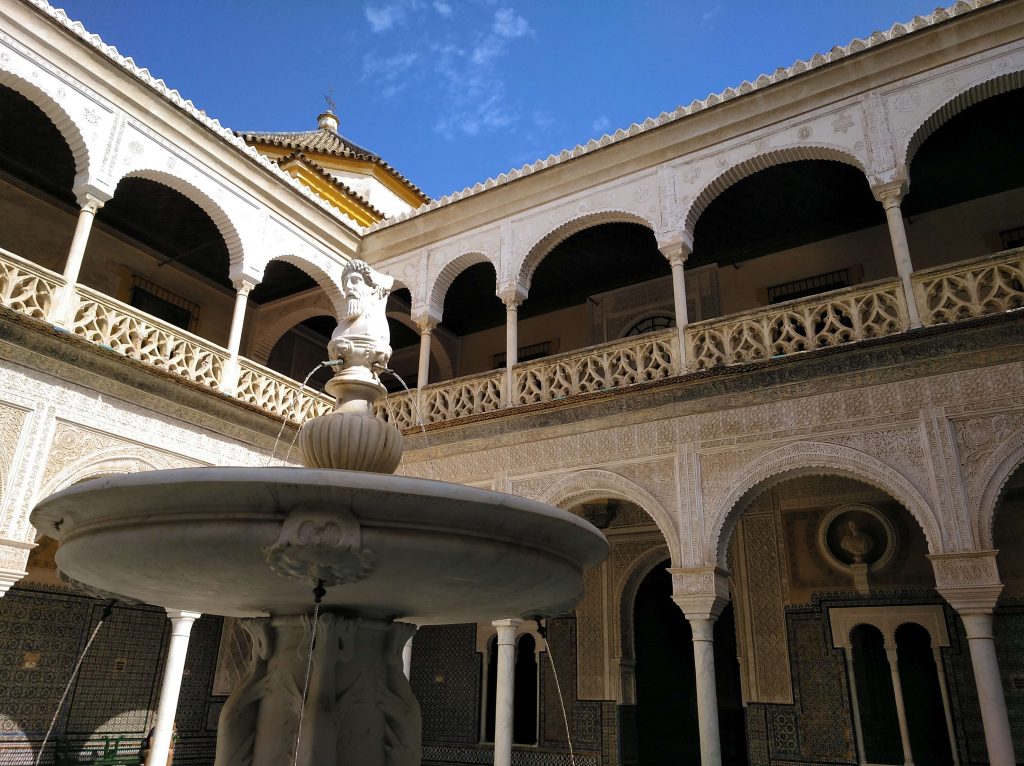 Fadrique modified the main courtyard, from the medieval period, although retaining its style, and tiled the patios and all the rooms on the ground floor. Today it presents more than 150 different tile motifs, the largest collection of ceramics following the local press-moulded glazed reliefs technique.

The greatest expansion was carried out by Per Afán de Ribera, who also established contacts with Italian workshops that served to decorate the palace with the 24 busts and 4 statues that stand out in the main courtyard. The collection of classical sculptures was ordered and distributed by Benvenuto Tortello, an architect hired by the noble to enlarge and improve the property.

Rooms named after the passion of Christ

All the rooms in the house are called after the passion of Christ. The Hall of the Praetorium, the Chapel of the Flagellation, the Hall of the Sanhedrin Judges or the Pilate Cabinet are some of them.

From them you can access the gardens. In the large one you can enjoy an archaeological garden, with pieces brought from Italy and Greece in the 16th century. But probably the most characteristic jewel of this stately home is the vault that covers the staircase that leads to the first floor. It’s similar to the one in the ambassador’s hall of the Real Alcazar, although smaller.

It was built in the XV century. At the end of the century and in the 16th century Catalina de Ribera began a complete reform of this place in the Gothic-Mudejar style. Her son Fernando Enríquez de Ribera finished its decoration and expanded the surface of the house, turning it into a Renaissance palace. It’s still a private property and residence of the House of Alba.

The name comes from a now-disappeared Cistercian convent, where nuns served queens in the 13th century. In the 15th century it came into the hands of the Enríquez de Ribera family, who reformed the site through Benvenuto Tortello a century later. Starting from a marriage bond in 1612, it enters into the House of Alba, inheriting the palace until today.

Cayetana Fitz-James Stuart left the stables with a carriage for her wedding with Luis Martínez de Irujo in 1947. In this stables there is an original saddle that belonged to Eugenia de Montijo, wife of Napoleon III.

The residential complex has numerous corners full of vegetation. Highlights include the archaeological garden with Roman busts, a beautiful Patio of the Oil and a California laurel -Umbellularia californica-, the only variety in the city. In addition to a ‘tablao’ (stage for flamenco) and a reading room, the two-story complex has tapestries from the 17th and 18th centuries, from Flemish workshops, in its famous ‘salón de la gitana’ (Gypsy girl room).

The famous poet Antonio Machado was born in this place in 1875. He dedicated different verses to this ‘corral de vecinos’ (a neighboring courtyard) at that time. The chapel witnessed the wedding between Amerigo Vespucci (responsible for the name of the American continent) and María Cerezo.

The Palace of Las Dueñas was visited by important politicians and famous artists from different places throughout the centuries. The writer Juan Ramón Jiménez, Nobel Prize for Literature; Prince of Wales who would become Edward VIII, and his brother, future George VI of England; telegraph inventor, Marconi; composer Cole Porter; pianist Arthur Rubinstein; Rainier of Monaco along with Grace Kelly, as well as Jacqueline Kennedy, widow of American President John F. Kennedy.