Islamic essence in the center of Seville 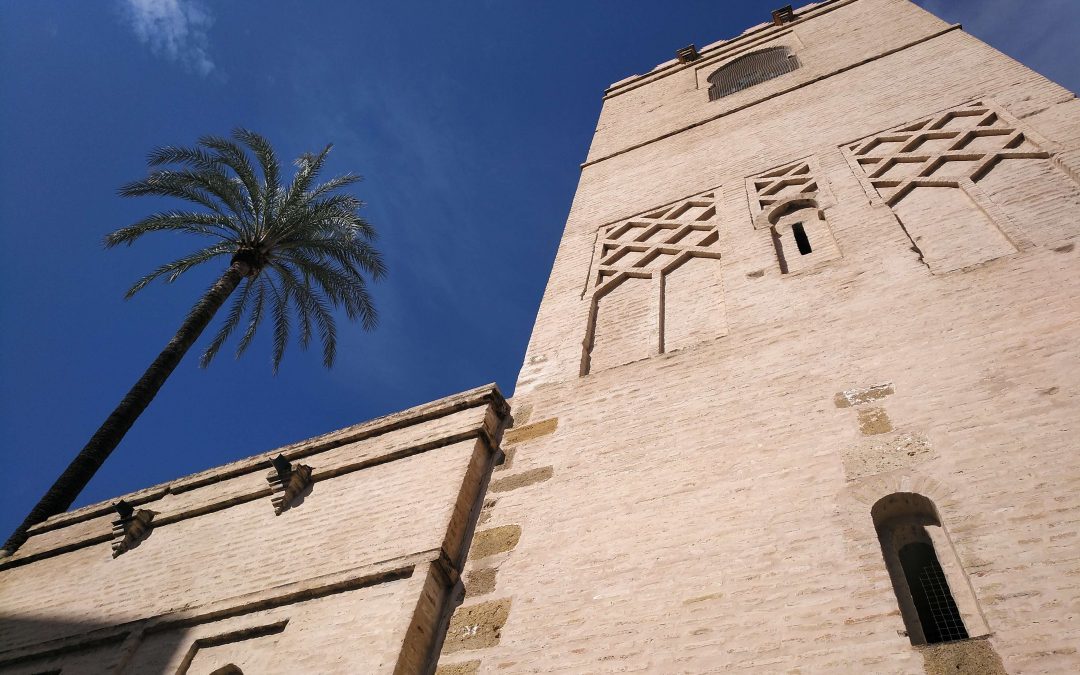 Many Sevillian churches, such as Santa Catalina, are built on top of former mosques and retain an Islamic appearance thanks to the Mudejar style, a very particular architectural and artistic trend in southern Spain.

Strolling through the center of Seville is like traveling in history. If we raise our heads we will see various pictures that will take us to times and past civilizations. A good number of them seem to be taken from the Middle East or somewhere in North Africa. Nothing could be further from the truth.

The Islamic legacy can be appreciated throughout the city, especially if we stop at a church or palace-house from the 14th or 15th century. But the layout of the streets also allows us to understand the configuration of a city that lived the passage of so many peoples and that became a center of great diversity of cultures and religions.

If we look at the temples, in addition to the Cathedral (erected on top of the Aljama mayor built by the Almohads in the 12th century), Seville has numerous sanctuaries that are also on the grounds of ancient mosques. Along with the cathedral seat, the collegiate church of El Salvador stands out, erected over the first major mosque, the so-called Ibn Adabas, built in 829 during the Arab rule. 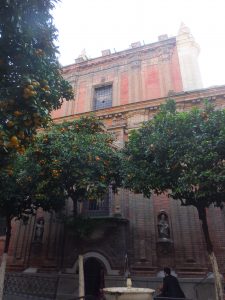 Theirs ablutions and minarets are still preserved. Even less showy elements, such as the bronze door knockers of Ibn Adabas, which today are found on the door of the Salvador’s Sacristy.

Some mosques became synagogues after the Reconquest of Fernando III, but the three that Seville had unfortunately disappeared due to the tragic pogrom of 1391.

Many of these ancient mosques preserved part of the minarets in order to incorporate the bell tower, such as the Cathedral itself with its famous Giralda. However, other churches incorporated a new architectural style in the 14th century, which consisted of combining the decorative techniques and materials used by the Muslims: the Mudejar. A style that will go hand in hand with others over the years, such as Gothic or Renaissance.

The Church of Santa Catalina, declared a National Monument in 1912, is undoubtedly one of the most outstanding temples in the Andalusian capital. It was built in the 14th century following the Gothic-Mudejar style.

It has three naves and houses a fascinating treasure inside, with works such as the 17th century altarpiece with Santa Catalina; the Christ of the Exaltation, by Pedro Roldán (1687); the impressive baroque Sacramental Chapel, by Leonardo de Figueroa (1721); and the baroque altarpiece with an exceptional painting of the Christ of Forgiveness –‘Cristo del Perdón’-, by Pedro de Campaña (1560). 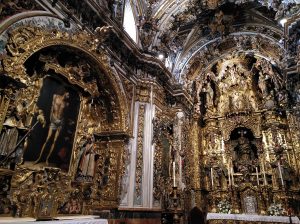 Christ of Forgiveness -left-, by Pedro de Campaña, in the Sacramental Chapel, by Leonardo de Figueroa

In addition, it’s the seat of several brotherhoods: the Exaltation (which goes out in procession every year on Holy Thursday); the Virgen del Carmen and Our Lady of the Rosary; and Santa Lucía (patron saint of sight).

Two years ago, the Church of Santa Catalina reopened to the public after fourteen years closed due to serious structural and conservation problems. Because of the value of its pieces and its past, it has become, since the reopening, one of the most unknown jewels of the city that is worth discovering.

The temple underwent a major restoration in the 1920s directed by the municipal architect Juan Talavera y Heredia, who installed in this building a Gothic facade of the Church of Santa Lucía. Today this intervention prevents the original Gothic-Mudejar entrance from being seen from the outside.

The portal was moved thanks to the mediation of Talavera, and finally it was led to the convent of Santa Clara. The famous architect rebuilt it in 1922 but, unfortunately, it’s now abandoned and inaccessible to the public.

It was one of the many relocation works carried out by Talavera in the city, which in many cases served to protect the works from demolitions. Among them, the facade of the original university shines, of which only the Santa María de Jesús Church remains standing.

The access to the old school (grounds of the Seville University founded at the beginning of the 16th century) was right on the axis that connects the Puerta de Xerez with the town hall. It was wanted to tear down in order to expand the city on the occasion of the Ibero-American Exposition of 1929.

The surroundings of the historic center of the city have endless alternatives that allow us to appreciate the Islamic past at a glance. Some street even has several samples, such as San Luis Street. 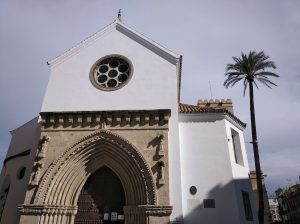 In the former Calle Real, which connects the monumental center with the north of the city and the Macarena neighborhood, there are the beautiful churches of San Marcos or Santa Marina, the latter one of the oldest and least modified in Seville. All of them built throughout the late Middle Ages on the foundations of what were once mosques.

Nor should we forget other locations far from the sacred world, such as the Real Alcazar or the numerous palace-houses that hosted the most powerful families in Andalusia. Without a doubt, the Palace of King Don Pedro in the Alcazar is the greatest expression of Mudejar art within a civil building that can be found not only in Seville, but in the world. The palatine complex was also erected on the grounds of a building of Muslim origin, an Almohad palace that, previously, had settled on the palace of King al-Mutamid during the Taifa period.

For its part, the Casa Pilatos is the best example of a noble house linked to the Islamic world, with multiple artistic and decorative techniques clearly influenced by the Moslems. Coffered ceilings, inlays, plasterwork and, the element that maybe stands out above all: ceramics. Only in this property there are more than 150 different tile motifs, all of them made in Triana in the 16th century.

Seville allows you to carry out a terrific and extensive tour of its streets in which you can enjoy this rich style that mixes two cultures so present in Spain a millennium ago: the Christian and the Muslim. Almost any corner offers the opportunity to enjoy this special and unique fusion in the world. Are you going to miss it?

Open chat
Do you need help?
We may be doing a tour, but we will respond as soon as possible. Remember that our opening hours are the ones of Seville, Spain.
We use cookies to ensure that we give the best user experience on our website. If you continue to use this site we will assume that you agree.OKPolítica de privacidad