What does the NODO of Seville mean? 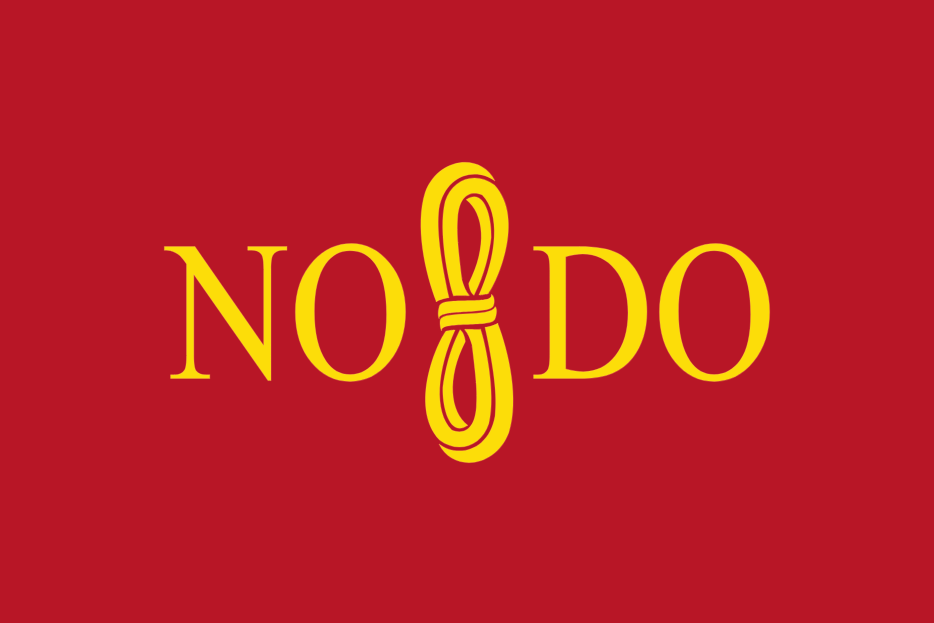 It’s one of the most frequent questions that tourists who come to Seville ask themselves: “Why is NODO written in many places in the city? What does it mean?” The truth is that if you walk through the Andalusian capital and look a little bit you will find it everywhere. The most curious tourists ask the tour guides as soon as they can, and although there are many theories, they all end up telling the most famous one that, without a doubt, is also the most fascinating.

War for the succession to the throne of Castile

To understand the origin of its meaning, one must go back in history to the second half of the 13th century. At that time, King Alfonso X ‘el Sabio’ (‘the Wise’) is at war with his son Sancho (Sancho IV).

The reasons that gave rise to this war between father and son are due to inheritance rights. The eldest son and heir to the throne, Fernando de la Cerda, died at just 19 years of age, but in his short life the prince had two sons, who claimed the throne of Castile upon his death. However, the Infante Sancho, Fernando’s brother, understood that the crown belonged to him. This circumstance led Alfonso to want to satisfy all parties, which led to the disagreement and the struggle of both pretenders to reach the throne without the mediation of the king.

Despite his great preparation and enormous knowledge, materialized in such recognized works as the Siete Partidas or the Alfonsine Tables, among others, Alfonso X didn’t know how to properly administer the country, since he spent almost twenty years an enormous amount of money to get the crown of the Holy Roman Empire -a title that never came- thus ruining the public treasury.

A band of enemies of the king emerged soon, with Sancho at the head, fearful that the king’s unfortunate efforts and bad administration of the state would end the dynasty. Sancho had the support of his mother, Violante de Aragón, and rose up against his father. Little by little they incorporated cities to their cause, declaring Alfonso to be dispossessed of the crown.

The monarch was left without support, although he found a large number of followers in his beloved Seville. Throughout his reign, Alfonso had always shown a special affinity for the capital. The founder of centers such as the prestigious Toledo School of Translators, chose this city as the place to found the General Schools of Latin and Arabic, as well as that of Grammar.

In addition, he was the architect of the Royal Shipyards, which would later become the largest shipyard in Europe. His devotion also led him to erect a temple in Triana -the church of Santa Ana– in gratitude for having cured a serious infection in one eye. For all these reasons it’s evident that the Sevillians will be loyal to him. 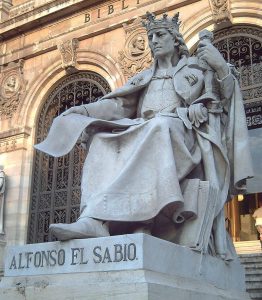 Statue of Alfonso X the Wise in Madrid

Seville “NO me ha dejaDO” (Seville “has not left me”)

Sancho was winning the friendship of noble and important Castilian families, gaining more and more followers in the fight against his father, although they hardly fought with arms. In time, the prince took over almost the entire kingdom. Alfonso, cornered, took refuge in Seville.

For his part, Sancho avoided attacking the city, since the purpose of the fight was not to end his father’s life. The most prominent knights of the city finally abandoned the legitimate king and went to Córdoba to recognize the new monarch, who would go down in history as Sancho IV ‘el Bravo’ (‘the Brave’).

According to tradition, the motto of the city comes from the fidelity of Seville to Alfonso. It’s a sort of logogriph (an acronym with a riddle) made up of three parts: first, the word NO; next, an element similar to a MADEJA (wool thread or skein); and finally the syllable DO.

The resulting word is read as a whole as “no-madeja-do” (“it has not left me”), which is interpreted as a phrase put into the mouth of an old Alfonso, expressing his gratitude to Seville for it’s loyalty. The city didn’t abandon him even in the worst circumstances and in the last years of his life.

It therefore refers to the attitude of the Sevillians who, after all, defend and take sides for a king who gave so much to a city that, in fact, he had helped to reconquer in 1248 together with his father, King Fernando III ‘the Saint’.

Nothing to do with the times of Franco

A curious aspect of this acronym is its similarity to the weekly newscast of the Franco regime, NO-DO (from NOticiario and DOcumentales). It was a news bulletin that, between 1942 and 1981, was screened in Spanish cinemas before each film. It served to inform about the actions of the regime, mainly in infrastructures, that were being carried out in the country, with the clear purpose of singing the praises of the dictator. Several generations of Spaniards have grown up with the characteristic music of the NO-DO and the images of Franco inaugurating reservoirs and swamps.